Accumulation of neuronal mutations over the lifetime of individual cells is linked to the development of neurological pathologies including epilepsy, dementia, Alzheimer's, as well as anxiety and depression1. Accurately characterizing genomic mosaicism of single neurons may ultimately revolutionize our understanding of brain development and function2,3. In this manuscript, the authors used ResolveDNA Whole Genome Amplficiation (WGA) which utlizes Primary Template-directed Amplification4 (PTA) to amplify single neurons and take advantage of the high allelic balance provided by ResolveDNA WGA, combined with their proprietary software analysis tool named SCAN2. This bioinformatics algorithm is a novel single-cell computational analysis tool that was paired with PTA to delineate single-cell mosaicism within the brain. ResolveDNA provides broad amplification across the entire genome with excellent uniformity, which allows for unprecedented sensitivity and specificity for detecting single nucleotide variation (SNV), insertions and deletion (Indels), structural variations, and copy number variations (CNV)5.

Human life, beginning with a single cell, from a single genome, undergoes nearly a trillion cell divisions. As cell differentiation progresses from the embryo a wide variety of cell types emerge, each phenotype with a specific function or job. Through these divisions and differentiation, errors occur in the replication and in the division of the daughter genomes. In contrast to previous assumption that the brain operates from a unitary genome, recent evidence confirms2,3,6 the hypothesis that somatic genetic diversity is prevalent in the human brain7.

While the ability to detect this variation has advanced, a major bottleneck has been the difficulty of amplifying the genome of a single

cell accurately and evenly so that it can be delineated by Next Generation Sequencing (NGS). In a manuscript published by Luquette, et al., previous methods for WGA, such as multiple displacement amplification (MDA), were compared to ResolveDNA PTA at the single neuron level.

In the manuscript, MDA was found to produce non-uniformity across the genome and often amplify homologous chromosomes of diploid cells at different rates, leading to allelic imbalance. To capture these genetic changes with greater precision, improved methods to accurately amplify the genome were tested

By combining the high allelic balance, and uniform amplification of the ResolveDNA system for single cell sequencing with the next 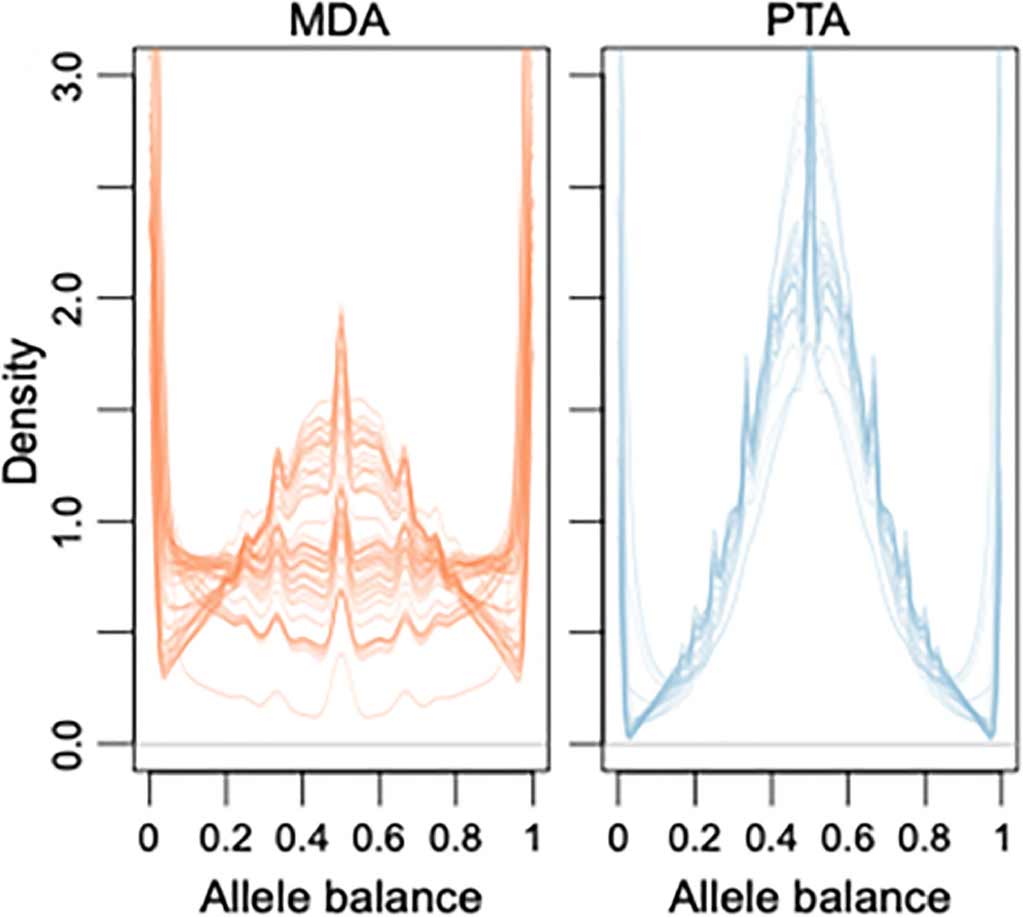 Figure 1. Allelic Balance of PTA compared. Allele balance for germline heterozygous SNPs in each sample. Each line corresponds to one single cell. Values near 0.5 indicate balanced amplification of homologous chromosomes; values near 0 or 1 indicate complete dropout of one allele

The data generated from single neurons published in the manuscript reveal the allelic balance following WGA with ResolveDNA is superior compared to previous work conducted in their laboratory using MDA (Figure 1). Allelic balance measures the evenness of amplification between alleles in a diploid cell; values near 0.5 indicate successful amplification of both alleles while values near 0 or 1 indicate loss of one allele. The data in the manuscript show that single cell genomes generated by ResolveDNA have allelic balance approaching 50% for germline heterozygous single nucleotide variants, compared to MDA which has been noted to be more variable in terms of allelic balance within and between individual cells analyzed at the same time.

To further define the uniformity of genome coverage, Luquette et al. used the MAPD metric to calculate regional amplification bias (Figure 2). On average, only 37% of MDA-amplified genomes exhibited balance levels in the range of 0.3-0.7 compared to 68% of PTA genomes. The authors also found the rate of amplification failure among ResolveDNA reactions to be low. Only a single neuron showed evidence of amplification failure in the form of near-complete loss of several haplotypes. The data indicate that ResolveDNA has roughly a 3X reduction in MAPD, which represents a dramatic improvement in coverage and amplification uniformity. 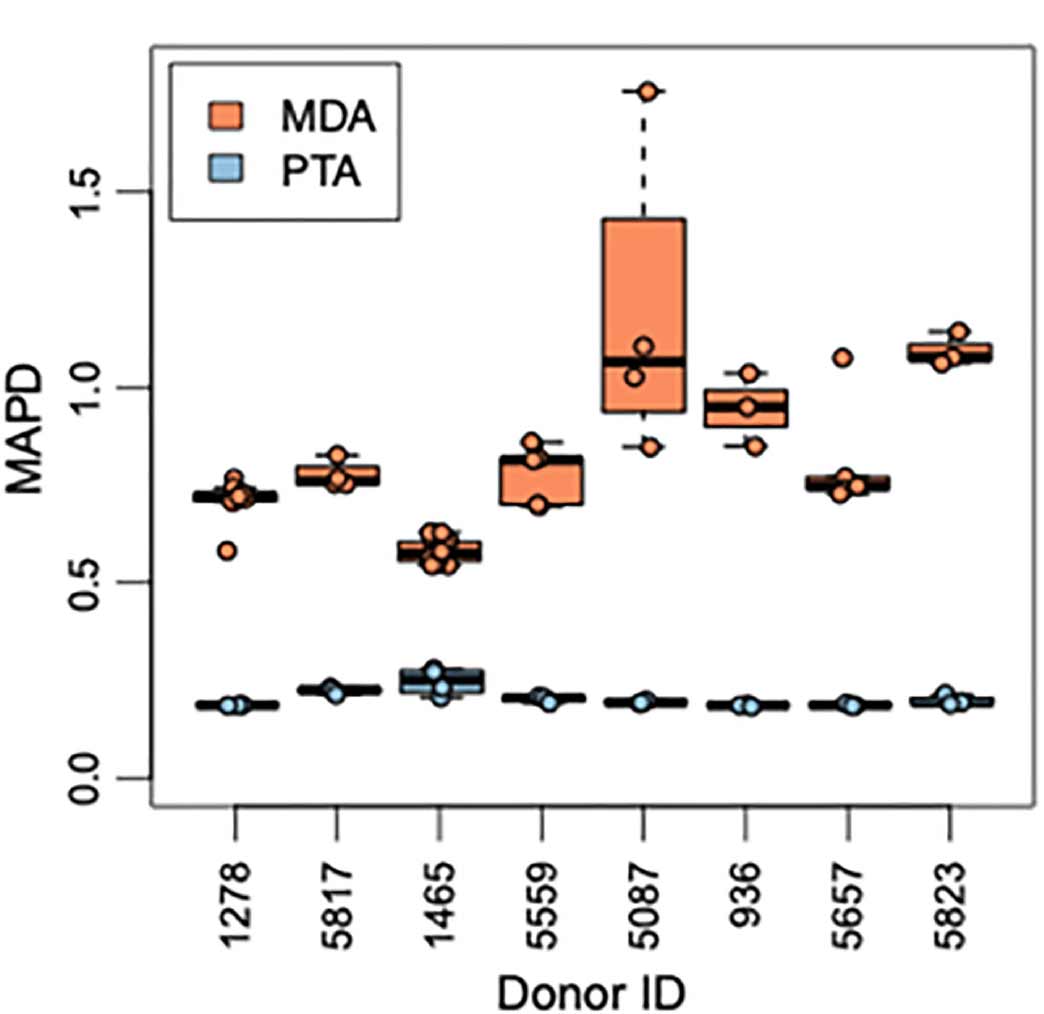 Figure 2. MAPD of PTA compared. Allele balance for germline heterozygous SNPs in each sample. Each line corresponds to one single cell. Values near 0.5 indicate balanced amplification of homologous chromosomes; values near 0 or 1 indicate complete dropout of one allele

A demonstrative example of the improved uniformity obtained with ResolveDNA PTA relative to MDA is the measurement of CNV in single neuron genomes (Figure 3). The data demonstrates that uniformity and balance across the genome is superior to that found employing MDA. These improvements in whole genome amplification uniformity led to dramatic improvements in the characterization of genetic mosaicism in the brain. Specifically, reported in the Luquette et al. manuscript, analysis confirms an increase in non-clonal somatic mutation in single neurons with age, but revises estimates for the rate of this accumulation to be 15 SNVs per year. In addition, somatic indels also increase by at least 2 indels per year per neuron which may have a more significant impact on gene function than somatic SNVs in human neurons. 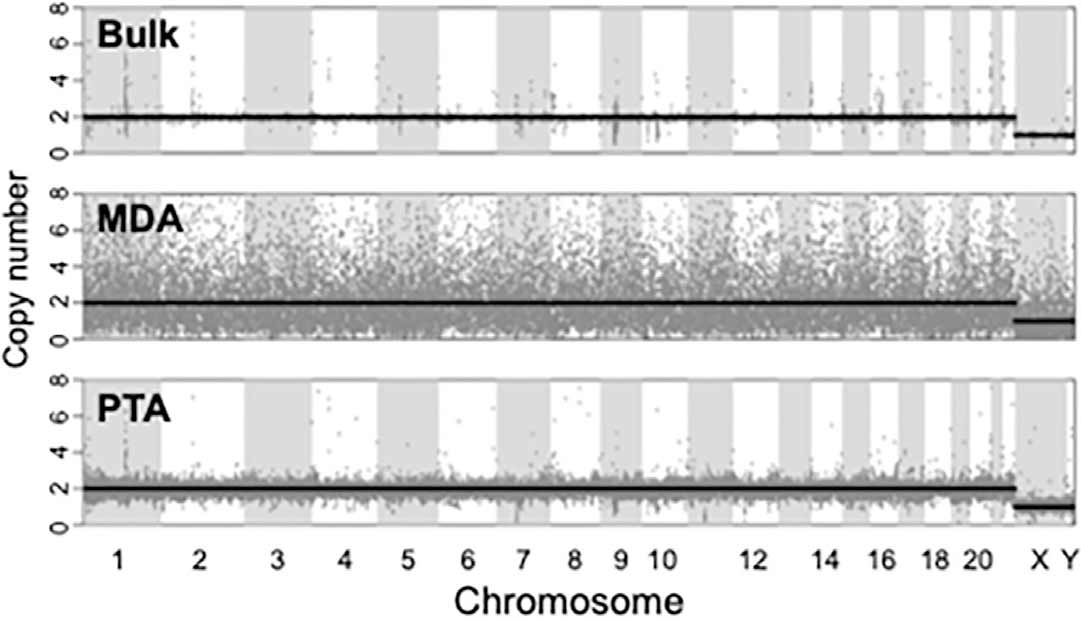 Figure 3. Allelic Balance of PTA compared. Single neurons were collected from the prefrontal cortices of brains of 8 individuals ranging in age from infantile to elderly. Single neurons were amplified by either PTA or MDA and then sequenced. Representative copy number profiles for bulk (top), MDA-amplified (middle) and PTA-amplified (bottom) genomes.
Summary

In the manuscript by Luquette et al., the authors combine the ResolveDNA single cell genome amplification system with the novel development of SCAN2 to demonstrate the ability to delineate single nucleotide variation with the highest levels of precision from single neurons. The data demonstrates that further refinement of the combined methods may lead to new biological hypotheses that bring about a redefinition of the underlying genomic mechanisms that drive neurological dysfunction and pathology. The Luquette, etal. manuscript clearly defines that both the methods employed to perform template amplification and the process to interpret the resultant next generation sequencing data are critical to ensure the highest degree of confidence in conclusions drawn from such experiments. Continuous development of methods that refine the analysis process are essential to the expanding single cell genomic field and are imperative across various fields of study. Including, but not limited to, neurology, oncology, reproductive medicine and studies of the microbiome.

This application note reviews and details a manuscript published as a preprint on BioRxiv as follows: