Primary Template-directed Amplification (PTA) is a novel, isothermal method that overcomes the challenges associated with whole genome amplification (WGA), such as low and/or uneven genome coverage, allelic skewing or dropout, and experimental artifacts.1

BioSkryb's PTA-based ResolveDNA protocol2 calls for manual pipetting of the four reaction steps. These steps include lysis/denaturation of the template DNA, neutralization of the lysis reaction, addition of the random primer and finally addition of the ResolveDNA reaction mix. The process generates the highest uniformity of amplification reported in the literature for low inputs of DNA and single cells. However, as the number of reaction multiplexing increases, the operator time increases, as does the risk of pipetting error. To mitigate this risk we have demonstrated a workflow for the execution of ResolveDNA reactions using a digital 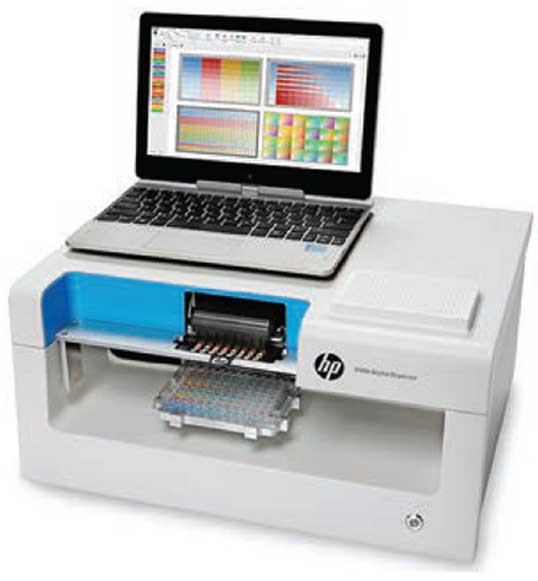 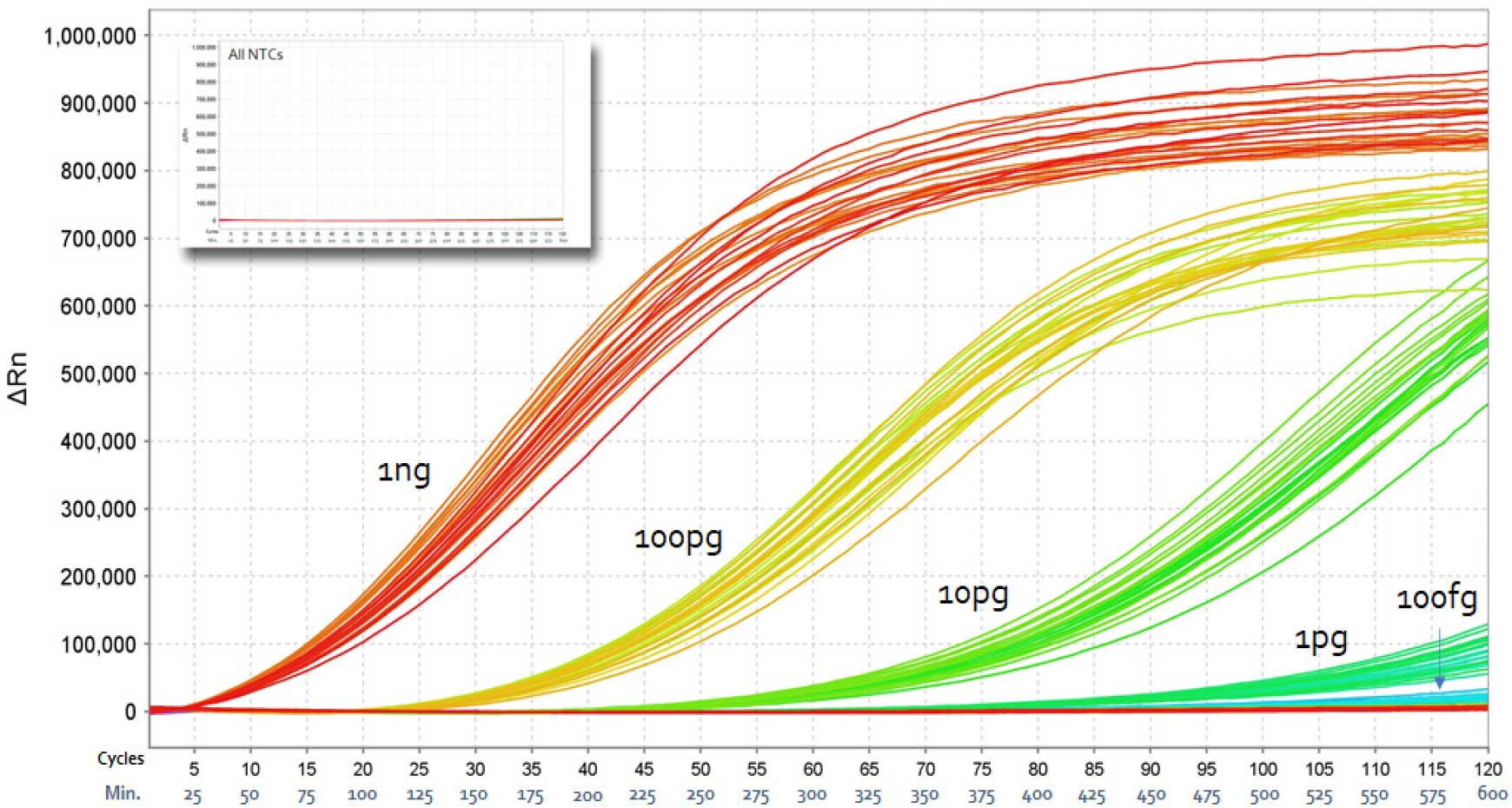 Figure 2. Real-time PTA curves for genomic DNA and no-template controls. Inputs produced a detectable signal between 1ng and 1 pg over the 10hr amplification, whereas no template control (NTC) reactions only crossed the threshold after 10 h (see inset). 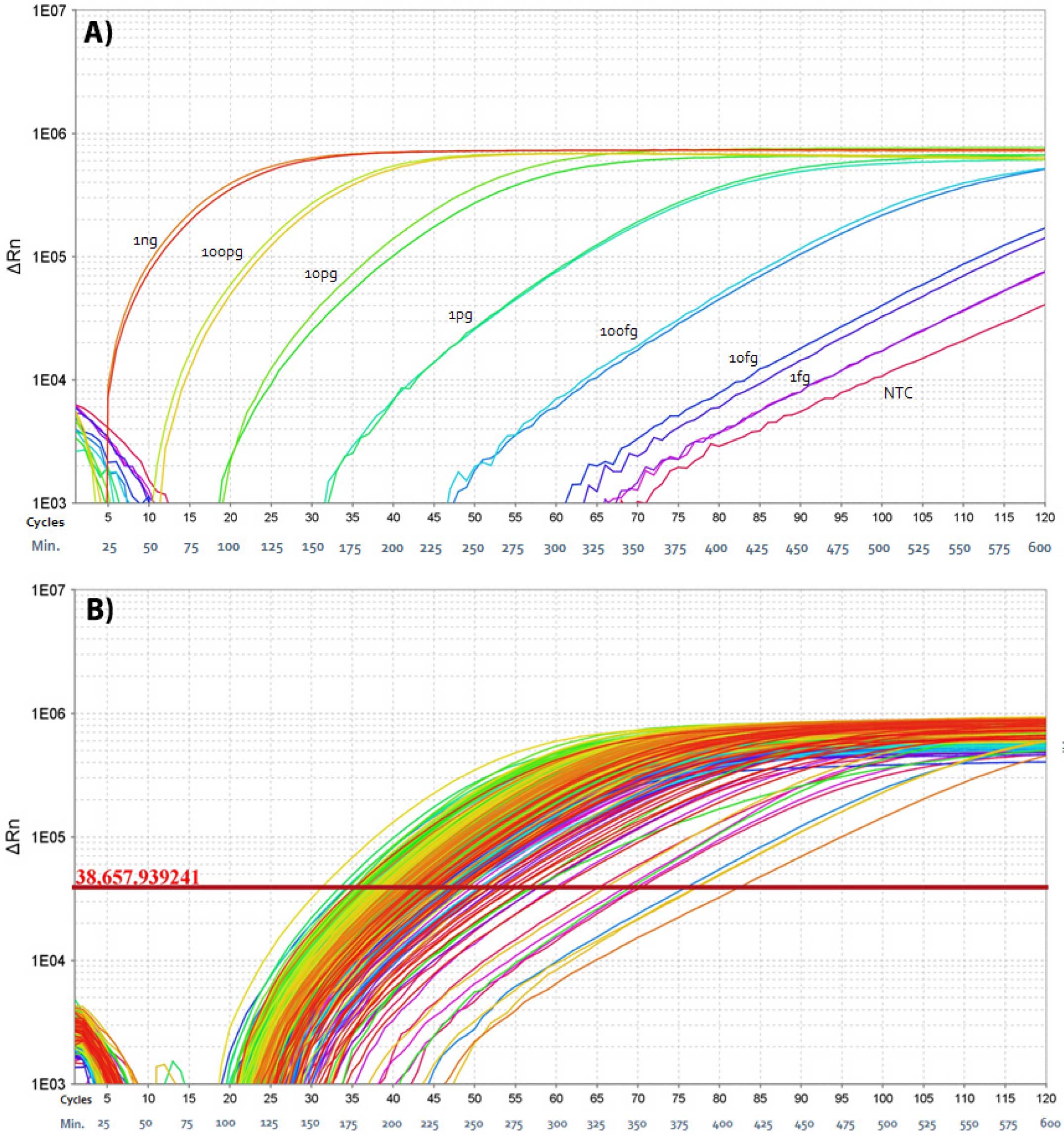 Figure 3. Real-time PTA curves for genomic DNA and no template controls (A) and single cells (B). A log plot of DNA, standard and NTC demonstrate > 5 logs of dynamic range (A) and the detection of 348/352 single cells. Some variation in single cell genome amplification was noted.

dispensing platform (HP D300e, Figure 1) to enable greater reproducibility. This results in a scalable, easier workflow that is more reproducible between operators and limits consumable usage.

Two types of samples were prepared: genomic DNA and single cells dispsensed into 384 well plates. For genomic DNA, the D300e digital dispenser was utilized to create a plate of

gDNA standards that covered 7 logs of concentration. Two standard concentrations were prepared, a high standard (10ng/µl) and low standard (10 pg/µl). Each standard (Figure 2) was dispensed between a volume of 100 nanoliters and 100 picoliters to create a range from 1 ng/rxn to 1 fg/rxn.

For PTA-based WGA, the standard ResolveDNA protocol2 was followed with four deviations. To facilitate automation, a digital dispensing assist reagent was added to each of the Cell Buffer, MSmix, SN1, SDX reagents for optimized dispensing. Additionally, the reaction volumes were decreased four-fold for each step, resulting in a total reaction volume of 5 µl. Third, the lysis and denaturation time was extended to 20 minutes at room temperature. Finally, for real time analysis and interpretation, a fluorescent intercalating dye was added to the reaction mix through a 10X addition to the 1X SS2.

To demonstrate the principle and utility of the integration of the PTA automation, we paired the ResolveDNA™ Whole Genome Amplification Kit (BioSkryb Genomics, cat. no. 100068 or 100136) with a D300e digital dispenser. The digital dispenser uses a novel inkjet dispensing consumable enabling dispensed volumes from 11 picoliters to 10 microliters.

First, to assess the accuracy and well-to-well contamination, genomic DNA was dispensed into a 384 well plate into alternating columns, interspersed with PTA-Grade Cell Buffer alone (NTC). Overall, the dynamic range of the genomic DNA dispensed spanned 7 logs of concentration, all easily managed with digital dispensing.

Following execution of the modified ResolveDNA protocol containing an intercalating reagent, the isothermal PTA reaction was monitored in real time. The amplification time required to obtain a detectable signal was proportional to the amount of genomic DNA dispensed and was highly reproducible from well to well across the plate (Figure 1). Whereas the 100 fg/rxn wells were weakly detected, none of the NTCs showed any amplification, indicating that the digital dispenser can reliably deposit reagents into each discrete well to provide even amplification of the templated reaction. These results demonstrate that digital dispensing is highly accurate and clean.

Having demonstrated the digital dispensing system maintained accuracy and reproducibility using control genomic DNA, we then evaluated the ability of the instrument to process reactions containing single cells. As described, single GM12878 cells were FACS sorted into individual wells across a 384 well plate. Alongside the single cells, one column of control genomic DNA was dispensed in similar fashion to the initial experiment. We first observed highly reproducible amplification of control genomic DNA that corresponded with DNA input, with the capabaility to distinguish even 1fg of input from an NTC control (Figure 3A). These data form a rudimentary standard curve with which to analyze single cells. The wells containing single cells largely amplified in between the curves containing 10 pg and 1 pg of DNA, correlating with the amount of DNA in a single cell (~6 pg), with a small number of wells amplifying later (Figure 3B). Out of 352 wells containing a single GM12878 cell, only ~ 1% approached the signal level of an NTC (considered a dropout), while approximately 7% amplified outside the nominal range 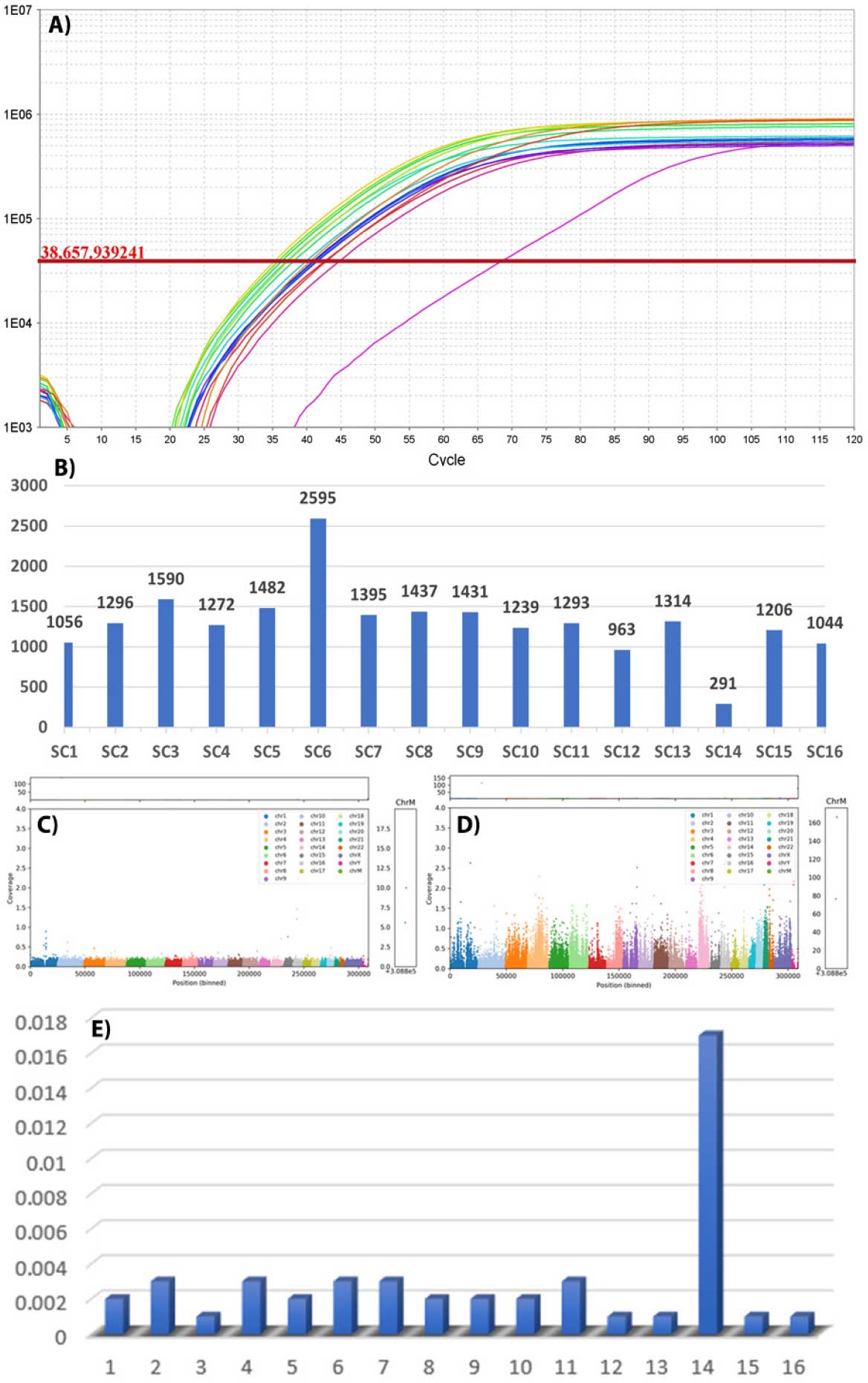 Figure 4. Real-time PTA curves for column 21 single cells. A log plot of single cell amplified in column 21 (A) demonstrated 15/16 cells performed as expected, while one cell was a slow amplifier. After purification, the amount of DNA produced in the reaction was coordinated with the rtPTA result. Libraries from the samples were created and sequenced using low coverage (~ 2million reads / cell). This revealed while cells that amplified nominally had uniform coverage of the genome (C), those that amplified slowly had non-uniform coverage (D) and high content of mitochondrial chromosomal DNA coverage(E).

(considered slow amplifiers). Overall the amplification of single cell demonstrated over 91% of the single GM12878 cells amplified within the expected parameters (Figure 3B).

We also observed useful correlations between the fluorescent signal observed and the amount of DNA generated during the reaction. When the amplification curve passes the detection threshold, the yield of amplified DNA was estimated to be approximately 100 ng. Once the signal reaches the plateau, low microgram quantities of DNA have been produced (data not shown). This suggests that reaction time can be calibrated to generate targeted yields of reaction. The optimal PTA amplification time for a specific amount of input DNA, sample or cell type can be calibrated such that it falls within the linear

phase of the reaction and is shorter than the time needed to produce a detectable signal from NTC reactions.

Moreover, we observed that the end quality of single cell sequencing can be preliminarily assessed through analysis of the amplification kinetics. A set of 16 cells from column 21 of the plate was analyzed carefully. One slow amplifier was obeserved in this column (Figure 4A). This slow amplifier (single cell 14) was observed to have a lower yield of amplified DNA (Figure 4B). To understand the impact of these slow amplifiers on sequencing quality, these samples were purified, quantititated and prepared for sequencing using the ResolveDNA bead purification kit and library preparation kits.

The ability to discriminate these performance variables is highly dependent on the ability to reliably and reproducibly prepare the ResolveDNA WGA reactions. As demonstrated the D300e digital dispensing instrument enables accurate and discrete reaction assembly, in a user-friendly format to allow convenient and reproducible single cell genomic analysis. This enables increased scale, decreased hands-on time and reduced operator variability. The monitoring of reactions using a fluorescent dye enables calibration of sample yield and evaluation of sample quality during the reaction.

The benefits of this combined workflow include:

In this tech note, we describe the use of advanced methods which are in development by BioSkryb Genomics. These examples demonstrate the ability to scale ResolveDNA amplification reactions beyond the released 24 and 96 rxn kit scale and were performed to evaluate the performance of the digital dispensing system. To discuss further how these capabilities may enable your research objectives, please contact BioSkryb and engage with our team of experts.